**If you are new to my blog and would like to start at the beginning of this series, click here.**

In some ways, the “cure” wasn’t a magic bullet.  I still do have some pain, and in some ways my life hasn’t really changed.

But in other ways, it was like magic.  Finally, I had an answer for my pain—a real answer.

For so long, I’d been told by various doctors and physical therapists that the answer had something to do with my mental health.  That I was depressed, or anxious, or afraid to move.  That “something bad had happened to me a really long time ago,” and my body was using pain to express my unconscious thoughts about it.

Perhaps there was a grain of truth in some of those things. I hadn’t exactly had a happy adolescence, and I was deeply afraid of the kind of injuries that had forced me to stop running.   I didn’t necessarily identify with the person in the picture they were painting—I didn’t consider myself to be particularly depressed, or troubled.  But these issues loomed large in my past, so it wasn’t too much of a stretch to imagine that maybe they were still affecting me more than I consciously realized.

I had wasted years, since the first person told me at nineteen that he didn’t think there was a concrete medical reason for my pain, wondering if psychological issues were to blame.  I was never completely on board with this theory, but I also didn’t have a better explanation.

For years, every health professional I saw would eventually tell me he or she didn’t understand why I was in so much pain.  “You have some issues with muscle tightness and posture” they would tell me.  “It’s possible you still have scar tissue left over from your surgery.  But I see other patients with these issues, and you are in more pain than all of them.”

Then each of them would proceed to give me some kind of advice.  Most of them were kind, and very well-meaning.  “I think maybe you should talk to someone about this.  I’m not really qualified.  Maybe you should see someone who has been trained how to help people with depression, like a psychologist.”

I called this conversation “The Talk.”  Every time I saw a new doctor or physical therapist, I knew it would come up eventually.

Sometimes I would be upfront about it at the first appointment: “I’ve been told there might be psychological reasons for why I’m in so much pain.” Other times, I would experiment by not saying anything, seeing how long it took for the person to reach this conclusion on his or her own.  Sooner or later, almost everyone did.

I was in college for most of these years, and as a result, I had access to hundreds of well-respected academic databases requiring a paid subscription.

I just didn’t identify with the kinds of mental health issues these articles would discuss.   In a way, maybe I would have felt more optimistic reading these articles if I actually considered depression to be one of my cardinal issues.

My problem wasn’t depression, it was pain.  Perhaps I would have felt more optimistic reading these articles if I actually felt I had clear-cut case of depression, which might improve with medication and therapy.

I had met with therapists from time to time, over the years.  The medical professionals I would see kept sending me to various people, and, agreeable young woman that I was, I would always agree to go and meet the next person.

But we never got anywhere.  Sometimes the therapist and I would agree that I might have a mild case of depression, but we never had the kind of huge psychological “breakthrough” that the doctor or physical therapist who had sent me there had hoped I would have.   Often times in therapy, the conversation would turn back to pain, and the therapist’s own experience with back or neck pain.   In the end, the therapist would usually just refer me back to physical therapy.

Over the years, whenever I wasn’t too occupied with coursework, I would think about depression and anxiety.  I wondered if it was possible that I was more troubled than I actually felt.

In retrospect, this was a completely pointless use of time, and of course it made me feel worse.  How can it be a good thing to insist to someone who doesn’t feel depressed that she spend time talking to other people about whether or not she might be depressed?  Why dwell on hypothetical negative emotions when you don’t have to?

But there was really no talking to some of these doctors.  Even the most sympathetic could not be swayed.  It was practically at the level of religious belief for some of them: if there is no concrete medical reason for a patient’s pain, then she must have mental health issues.  There was just no way around it. 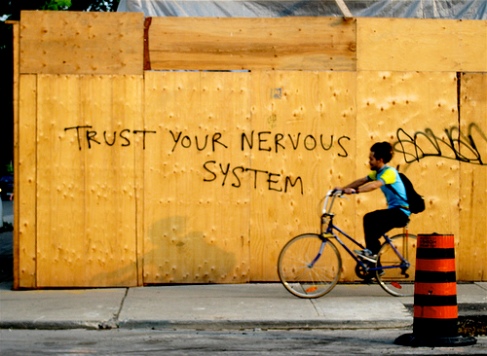 That is why the Neil Pearson lectures blew my mind the first time I watched them.   It made so much sense right away—how could anyone have a discussion about pain without discussing the functions of the nervous system itself?  All these doctors I had seen had focused only one aspect of the nervous system: the neurotransmitters of the brain.

But there were other aspects of the nervous system that were worth discussing.    The peripheral nerves, the things that sense mechanical damage, temperature, and chemical signals.  The dorsal horn of the spinal cord, where sensory information enters and travels up to the brain.  The relationship between the brain and the spinal cord, and how, somewhere along the way, your body can decide whether it needs to know more about what’s happening in your body, or whether it’s safe to tune those signals out.

Nowhere in the lectures did Neil bring up the subject of depression.  Not, I am sure, because he had never learned anything about the relationship between depression and chronic pain.  But because there was a better explanation out there, one that did not require a diagnosis of ill mental health.

What had happened to me wasn’t some freak occurrence that had happened only to me, as a result of some psychological trauma I couldn’t even remember.  It was, instead, the result of normal processes of the nervous system being altered by physical trauma, which of course I could remember, and which made sense to me.

How was it possible that none of the doctors or physical therapists I had seen before had known this information?  I wish I knew.  I don’t really have a good explanation, except for that all of the decent research on pain science is very recent, whereas psychologists have been studying depression and chronic pain for over a century.   Some of the theories people were using to diagnose me, I realized, hadn’t changed very much since the days of Sigmund Freud.  It seemed that many of the research studies on depression and chronic pain had been based off of some of these same assumptions.

I am really hopeful that in ten to twenty years, the “conventional wisdom” about the causes of chronic pain will be a bit more modern.  I really hope that, someday, the kinds of things I learned in physical therapy will be taught, not as optional continuing education courses, but as part of the required curriculum in medical, physical therapy, and occupational therapy schools.

To be continued in Part 6!

Top Photograph: Don’t worry, I don’t understand everything that’s going in this photograph either.  But it seems a hell of a lot more scientific than simply making the assumption that a patient is depressed.  Thanks go to Open Michigan.

Second Photograph: I love when I randomly find awesome things like this on Flickr.  We should all trust in our nervous systems. Thanks go to Cliph for the image.

10 thoughts on “How a physical therapist helped me through my lowest point, Part 5”

Leave a Reply to sunlight in winter Cancel reply